Confessions of the Founder

From the day I was born until the age of thirteen I was raised in the Catholic Church in Boston, Massachusetts. In 1971 my mother, married a soldier in the U.S. Army.

We promptly moved down to the Fort Bragg area in North Carolina. After a brief stay in Fayetteville, My family and I moved to Spring Lake in 1972. It was on Thanksgiving Day of that year both Mama and my stepfather announced, to me and my brother, they were both leaving the faith.

The food was ready and it was time to say grace. We all sat down, ready to bow our heads. Mama asked, "Who's going to say grace?" It was an odd question because my stepdad always said grace, but he looked up at Mama and said, "After Cambodia (where he was stationed in 1968 during his last tour of duty with the US Army in Southeast Asia), I no longer believe in God."

As they looked at each other, I turned to Mama. As she looked back across the dining room table at my stepdad she said, "Well I don't know why God lets bad things happen to good people."

Long story short: my stepdad became an atheist, my mother became an agnostic and I ended up saying grace that day. Since that day, I have had a deep and abiding hatred for devils, and that event is just one of many that are part of the "beef" that I have with Satan. 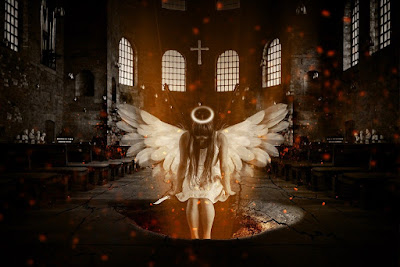